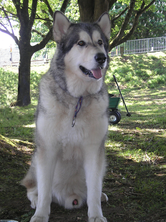 Alaskan malamute is the largest of the artic dogs.  They are featured as a powerful, sturdy body built for stamina and strength.  It reigns as one of the oldest dog breeds whose original looks have not been significantly altered. When you first see an Alaskan malamute, it’s easy to be impressed by their large stature, wolf-like face markings, and a huge plumed tail waving at you.  It’s often believed that malamutes are part wolf, they might have played as a wolf in movies and on TV, but in truth they're all domestic dog.  Alaskan malamutes possess a tremendous strength, energy, independence and endurance.

They are extremely loyal and intelligent, sweet and most affectionate toward it's master, also great with children, some people say that they are the perfect babysitters.  They were originally sought to pull heavy sleds over long distances as well as to hunt seals and polar bears.  Now chosen primarily for companionship as they are very friendly therefore not suitable as a guard dog.  Malamutes are happiest living outdoors as long as they receive enough companionship, but they also enjoy living indoor where their human ”pack” lives.  Without firm leadership and daily mental and physical stimulation these dogs may become destructive nuisances, acting like big, rambunctious puppies.  In one case, a single dog ruined an entire living room of furniture in just three hours!

They love being outside like any other dog, they love outdoor activities. Males can be very dominant; they need the humans around them to be firm and confident and a consistent pack leader.  This breed should be supervised around unfamiliar small animals, as they have a strong prey instinct, this does not mean they are not good with small animals, some malamutes have been known to raise small kittens as their own.  Both sexes can be combative with other dogs, especially with the same sex breed and firm handling and training are necessary to curb this.  Proper socialization with people and other dogs is important like for any other dog as well.  Alaskan malamutes are not recommended for apartments or small flats, or as a first time dog!

They are fairly active indoors and should have at least a large yard they can run around in.  If you live in a suburban area, strong, high fences are a must and bury the base because they are likely to dig their way out!  Males like to roam in what he considers to be his territory.  Their coats allows them to withstand extreme cold weather, but you have to be careful when you try to keep them cool in hot weather, make sure they have shade and plenty of clean cold water at all times.  There are coats for extremely hot weather that an owner can purchase; these are called “Swamp Coolers”, as they lower the dog’s body temperature to allow them to withstand the occasional heat wave.

Temperament:
If the Alaskan malamute is the right breed for you, they will give you years of enjoyment as an active playmate and companion.  They will easily win you over with their playful, outgoing dispositions.  They greet everyone as a friend, even strangers and first time house-guests so they don’t make a good guard dog, as  previously mentioned earlier, but they are loyal to their family and friends.  Alaskan malamutes are pack animals, and they enjoy spending time with their human pack, insisting on being included in all activities that his/hers family undertakes.  They're not big time barkers, but they do howl and they're known for making a characteristic” woo woo” sound.