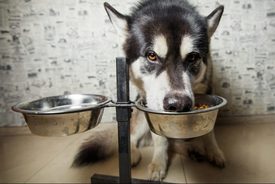 Is the food you buy for your dog really as good as you think?  Take a closer look next time you go and buy the dog food you always buy.

The typical ingredients in most the major dog food brands are ‘cereals’. ‘Cereals’ is a term for all types of grains.  By using the term cereals on the label, the manufacturer can use whatever grains cheapest at the time.  This is usually used with the manufacturer’s profit margin in mind as opposed to the quality of the food for your pet.  Cereals are also a common bulking agent.

The protein in most complete dog food is in the form of meat and animal derivatives.  This is low quality protein as it comes from the less desirable parts of an animal such as the feet and guts.  It uses the bare minimum level of protein, and it is recommended to provide a higher level of protein in your dog’s diet than what most of them provide.

Complete dog foods’ also contains various sugars.  Although sugar is vital to your dog’s health too much sugar is obviously very bad.  The level of sugar in most of the top brand dog foods could explain the complaints of hyperactivity from some owners’ dogs.

E320 - has been found to be tumour-producing when fed to rats.  In human studies it has been linked with urticaria, angioedema and asthma.
E321 – Banned for use in food in Japan, Romania, Sweden and Australia.  The US had barred it from being used in infant foods.  So bad, McDonalds have voluntarily eliminated it from their products.
E310 – Banned from children's food in the US because it is thought to cause the blood disorder methemoglobinmia.
E172 – Banned in Germany.
E132 – Can cause skin sensitivity, a rash similar to nettle rash, itching, nausea; high blood pressure and breathing problems. One of the colours that the hyperactive children's support group recommends is eliminated from the diet of children. Banned in Norway.
E102 – Tartazine- a trial on 76 diagnosed as hyperactive showed that tartazine provoked abnormal behaviour patterns in 79% of them.
E110 – Sunset yellow has been found to damage kidneys and adrenals when fed to laboratory rats. It had also been found to be carcinogenic when fed to animals.
E104 – One of the colours that the hyperactive children support group recommends be eliminated from the diet of children. Banned in Australia, Japan, Norway and the United States.
E171 – Banned in Germany.
E153 – Banned as a food additive in the United States of America, Suspected as a carcinogenic agent.

It's worth spending money on good quality food.  We recommend using either Skinners or Burns  or an equally good quality complete dog food because it's proven to improve your dog’s health and you will notice the difference within a few short weeks, their coat condition, behaviour and energy level.  It is an all round better quality food for your beloved fur kids.