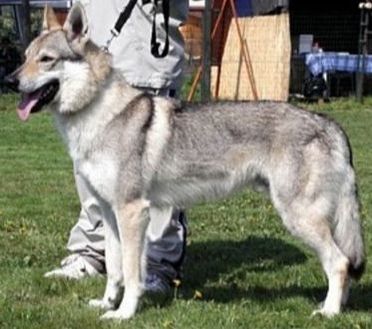 The timber wolf is a wolf hybrid or wolfdog that is normally bred with the Alaskan malamute, Siberian husky or German shepherd.  The timber wolf has a life expectancy of 12 to 14 years.  The first documented breeding of a wolf and dog took place in England in 1766.  There are also many dog breeds in existence today that are thought to have some type of wolf in their ancestry.  However, it was not until the 1960s when breeders began crossing dogs with the American grey timber wolf with the purpose of creating a companion or pet.

The timber wolf has few grooming needs, but it is important to start handling their coat, ears and nails at an early age to get them used to being touched.  The timber wolf’s coat may more closely resemble their wolf or dog heritage, but is normally thick and coarse.  The timber wolf’s coat sheds moderately most of the year, then more heavily during the change of seasons.  They should be brushed once a week and more frequently during their heavy shedding seasons.  Timber wolves should also have their ears cleaned and nails trimmed regularly. They only need one or two baths a year.  As a wolf hybrid, the timber wolf is generally more reserved and less predictable than domesticated dogs.

Temperament
This is dependent upon their breeding, but they tend to retain more wolf-like characteristics. Wolf hybrids are generally shy and curious.  They are not outgoing like a purebred Siberian husky or German shepherd.  Timber wolves are more likely to be private and quiet.  However, they can be loving and affectionate with their owners.

The timber wolf takes about three years to grow out of their puppy stage and can be rambunctious during those years.  The timber wolf is not a companion for small children.  They may misinterpret their screaming and running around as reason to chase after them. Likewise, the timber wolf should not be housed with smaller animals as they may regard them as prey.

The timber wolf requires an experienced handler along with lots of training and socialization.  The timber wolf wants to be dominant and needs a strong alpha as a leader.  Consistency is very important with the timber wolf as is positive reinforcement.  The timber wolf should never be treated harshly.  Wolves are surprisingly sensitive and will lose respect for their owner if yelled at or abused.  The timber wolf is energetic and may be best suited to life outdoors. The timber wolf is a chewer and digger, and can be destructive if housed inside. They also need room to roam. Timber wolves require a secure yard with a high fence or a comfortable pen. If the timber wolf does live indoors with their family, they need at least 60 minutes of outside time every day.