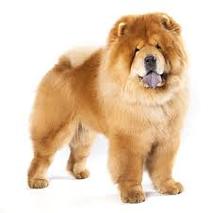 The breed can be traced back to the Han Dynasty of 2000 years ago as the Han Dog, a guard dog.  In early China the Chow was an important food source.  He was specially reared on grain and then slaughtered while young for tender meat. His skin was used, as was his coat for trimmings on clothes.  The breed was also used for hunting and as guard dogs.

Two Chows were brought to Britain in 1780 by traders from the East India Company. In 1828 London Zoo imported some dogs from China called the Black Mouthed Chinese.  During her reign Queen Victoria acquired a Chow and public interest in the breed was aroused.  The breed was recognised by the Kennel Club in 1894 and became fashionable in the show ring.

The Chow has several special traits: the black tongue and gums, the leonine appearance given by its mane of harsh, off-standing coat and its rather stilted gait.

The Chow Chow is a large, stocky dog.  The two most distinctive features of the Chow Chow are its blue-black tongue and its almost straight hind legs, which makes it walk rather stilted.  The head is large and broad with a flat skull. The muzzle is broad and deep.  There is a huge ruff behind the head, which gives it a lion-like appearance.  The black nose is large with well open nostrils.  The teeth meet in a scissors bite.  The small, erect ears are triangular in shape and round at the tip.  The almond-shaped eyes are deep-set and dark in colour.  The chest is broad and deep.  The tail is set high, carried very close to the back.  Dewclaws are sometimes removed.  The profuse, dense, furry coat comes in two varieties, smooth and rough.  The most common colours are solid red, black, blue, cinnamon and cream, but it can also come in tan, gray, or a rare white.  The coat sometimes has lighter or darker shades, but is never parti-colored.

Temperament
The Chow Chow is a well-mannered dog.  Quite good with children.  If they get to know cats and other household animals when they are young, they will get along with them when they are adults.  Should be thoroughly socialized preferably when they are young.  They need firm authority and training starting at puppyhood.  Whether you are adopting a puppy or an adult dog, owners need to set the rules for the dog to follow and stick to.  This is a very dominant breed that requires a dominant owner.  The owner of this breed of dog should be a calm person who is naturally firm, confident and consistent.  With such a handler, the Chow Chow can develop well.  The problems arise when the dog lives with owners who do not understand how to be, and stay in, the alpha position.  If you allow this dog to believe it is the boss of your house it will become stubborn, protective and sometimes downright unruly.

Unless the dog senses the owners are very strong-minded, it will work hard at keeping its alpha position in your human pack.  When this happens it does not consider itself as being mean, but instinctually is telling you in the way dogs communicate with one another that it gets to decide when and how things are done.  It will be self-willed to the point of obstinacy and may be overprotective.

When you have a Chow Chow that believes he is the ruler of humans, and strangers push themselves on this dog, he may become aggressive, telling the humans he would like to have his space.  Space means a lot to a dog.  It is respect in the dog world.  Chow Chows that believe they are boss will often be a one-person dog, very loyal to their master, though he may act reserved, even with them.  Alpha Chow Chows like to dominate other dogs.  A Chow Chow that is not 100% convinced humans are the boss will be harder to obedience train.  The Chow will feel IT needs to be deciding what and when to do things, not the human, as humans must listen to IT.  These are NOT Chow Chow traits, they are instinctual behaviours, resulting from meek human authority over the dog.  If you would like to own a dog, make sure you, and the rest of your family, know how to be alpha.  All family members, and other humans around the dog, must be higher in the pecking order than the dog.  Chow Chows can be quite a handful with passive owners, but take the very same dog and put him with an owner who has natural authority and he will be polite, patient and well rounded, making an excellent family companion.

Regular brushings of the long coat is important to maintain the lifted, standing-out look.  This breed is a seasonal heavy shedder and extra care is needed when the dog is shedding its dense undercoat.  Dry shampoo when necessary.